A Season on the Brink

February’s weather roller coaster continues its wild ride into the end of the month. The weather cools. Warms. Cools again.  Mornings are unexpectedly shrouded by fog. 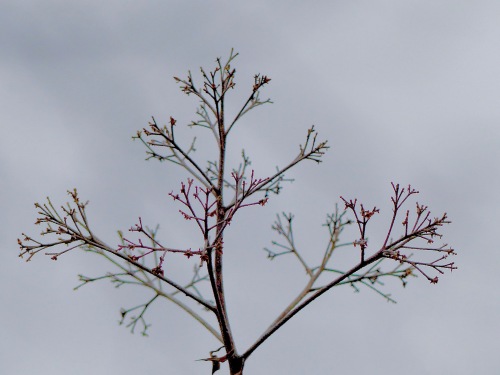 Milkweed bugs emerge early. Too early? Confused, they look for their signature plant and find only the last bleached-out stands of grasses and crumbling wildflowers. 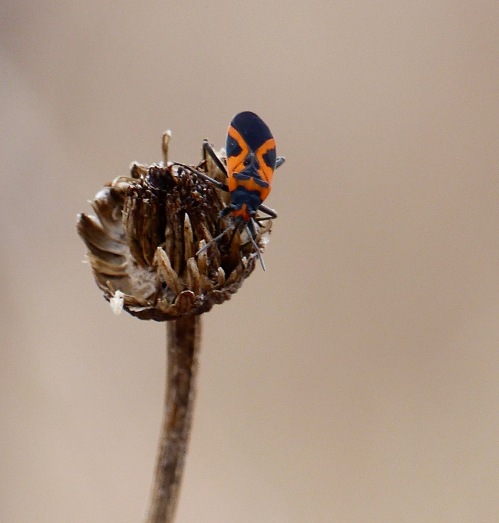 There’s a lick of flame. The tallgrass is intentionally torched… 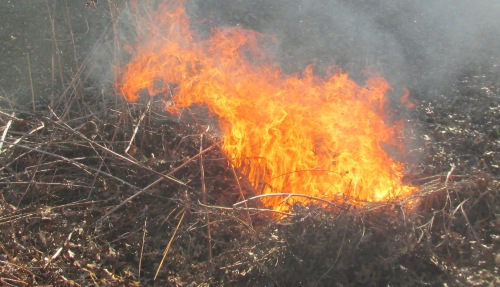 In a flash, the muscled stems and starred coneflower seed heads… 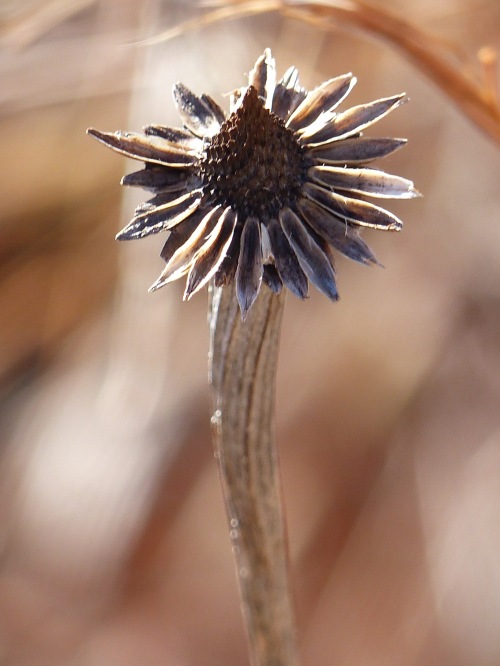 …and diverse species of grasses… 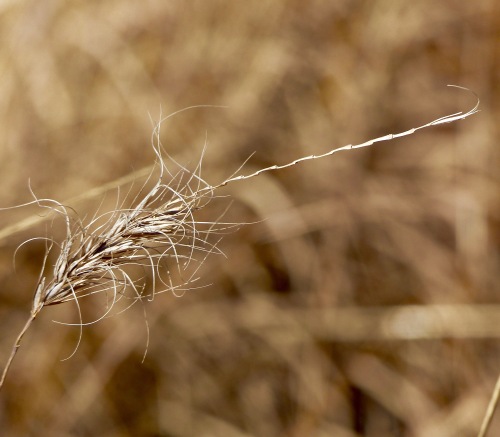 …of the past season disappear.

The landscape changes to one of smoke and ash.

A day or two passes. The prairie, sleek in the aftermath of fire, is a just-cleaned blackboard. 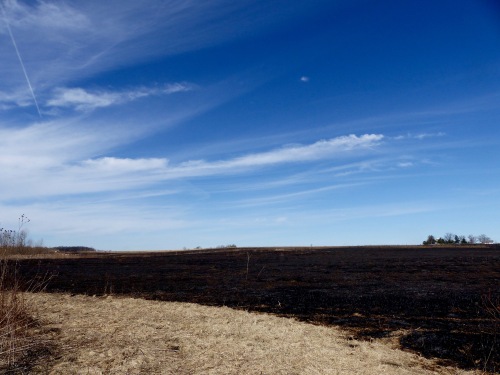 What new memories will we chalk  upon it?

Slowly, the signs of spring appear.  On the edge of the burned prairie, St. John’s wort leaves tentatively unfurl.

There’s a fresh smell in the air. A difference in the slant of the sun. It’s as if a window is opening to something new.

We feel it. Spring.  The heat of the prescribed fire. The emerging insects. The green of new leaves. The arrival of the sandhills.

On the last day of February, we wait for it.

A season on the brink.

Hal Borland (1900-1978) was an American nature writer and journalist. Born in Nebraska, he went on to school in Colorado, then to New York city as a writer for The New York Times. In 1968, he won the John Burroughs medal for distinguished nature writing for Hill Country Harvest.

Orchids in the Tallgrass

“It’s about getting immersed in something, and learning about it, and having it become part of your life. It’s a kind of direction.” –Susan Orlean

Even the most loyal prairie lovers may find themselves hungry for a little bright color in February. Sure, there are the russets and silks, still out there until the first licks of flame from a prescribed burn turn them to memories.

But don’t we always long for that which we don’t have?

If you want a jolt of bright colors in winter, the Chicago Botanic Garden’s Orchid Show is a pretty good bet. Wander through the greenhouses, and you’re immersed in pink, purple, and orange.

And ohhh! That smell of humidity and moist earth! If I close my eyes and inhale, I can imagine I’m on the prairie after a July thunderstorm.

Here, at the Chicago Botanic, I learn a few things about the cultural and social significance of the flowers. Orchids, I find, are often a symbol of wealth. Turns out Beyoncé had 10,000 of them flown in for her wedding. On a lesser scale for us mere mortals, perhaps you had an orchid corsage for your high school prom or an Easter outing. The Orchid Show may prompt a flood of these types of orchid-related memories. 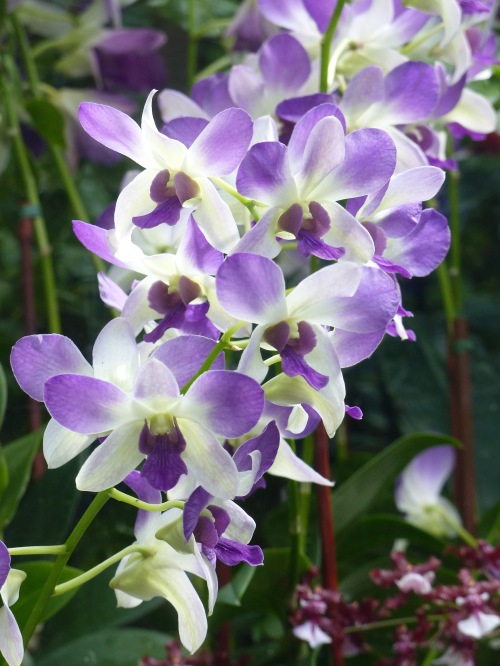 But not all blooms are of the corsage type. There are orchids in simple, clear lemon-colored zen forms…

…orchids in every possible combination of colors…

…and many crazy patterns. 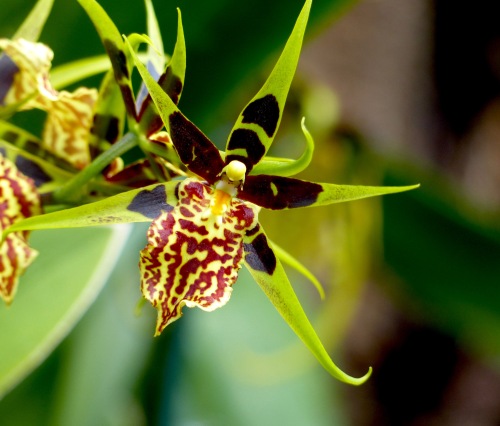 The white orchids are stunningly elegant in their simplicity.

Beautiful, yes?  Yet, they still fail to delight me like the orchids on the prairie.

Orchids on the prairie? What’s that, you say?

Illinois has 45 different species of native orchids, I learn at the show, including the small white lady’s slipper in the photo above. They come in different shapes, sizes, and colors, as their exotic cousins do.

But perhaps the native orchids are prettiest in bright white. Like these nodding ladies’ tresses in the autumn tallgrass. 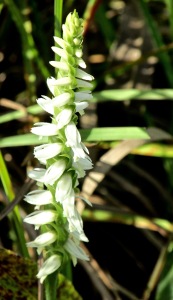 Mmmm– that scent! Light and vanilla-ish.

Some of the Chicago Botanic Garden’s exotic orchids are scented, as well. This orchid smells like chocolate. 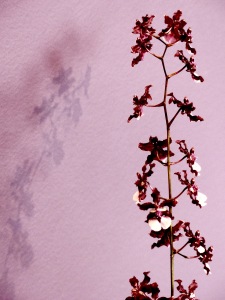 There are spectacular non-native pink orchids on display at the Orchid Show.

Although they are beautiful, I still prefer the pink lady’s slipper orchids, like this one I found up north, around Lake Superior.

I admire the blooms at the Chicago Botanic’s Orchid Show.  They bring sunshine and a touch of the exotic to my Midwestern winter.

But, attending a flower show is a different experience than the joy I feel when I find an native wildflower, like this eastern prairie fringed orchid, while out for a hike on the prairie. That feeling can’t be replicated in any hothouse, no matter how beautiful the display. 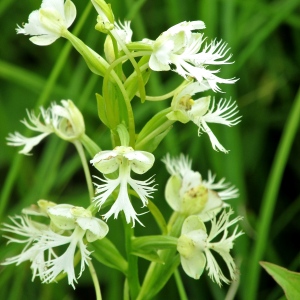 Once you know the location of a particular orchid, you follow its existence with a bit of parental anxiety. Sort of like a mom waiting up for her teenager when curfew is long past. Will the orchid bloom again this season? When? Will the weather conditions favor it? What about trampling animals; lack of pollinators?  Will the orchids show up?

Which makes finding native orchids each season a treasured moment. Imagine the happiness I felt when the little patch of  lady’s slipper orchids I’ve watched over like a mother had twelve blooms this spring, instead of six, as they did the year before.

No floral display –not even one with 10,000 orchids–can replicate the tallgrass prairie landscape with its native orchids, and its attendant serendipities and disappointments from year to year.

But until spring comes to the prairie, the exotics will stand in. And they are welcome for their color, variety, and scent, just as the natives will be as the weather warms up.

Susan Orlean (1955-, whose quote opens this essay,  is the author of The Orchid Thief: A True Story of Beauty and Obsession (1998), based on an article she wrote for the New Yorker about Florida orchid growers and poachers. Her book was later made into the movie, Adaptation. She grew up in Cleveland, Ohio, and graduated from University of Michigan. Orlean was awarded a Guggenheim Fellowship in 2014.

“Every morning I wakened with a fresh consciousness that winter was over.  There was only—spring itself; the throb of it, the light restlessness, the vital essence of it everywhere: in the sky, in the swift clouds, in the pale sunshine, and in the warm, high wind—rising suddenly, sinking suddenly, impulsive and playful like a big puppy that pawed you and then lay down to be petted. If I had been tossed down blindfold on that red prairie, I should have known that it was spring.” –Willa Cather
***

But wait! Listen closely. There’s a whisper of spring.

Do you hear the crackle of ice melt?

Do you see the skunk cabbage, bruised by the cold? It burns through the leaves and unfurls its rubbery leaves. 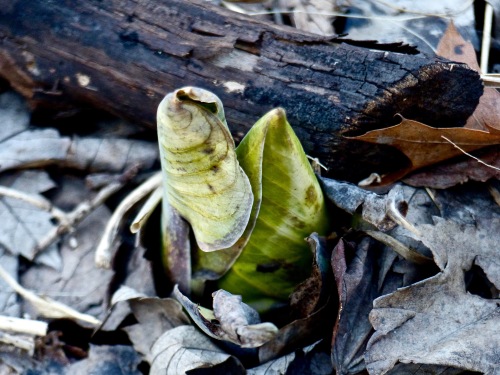 Most of the prairie wildflower seeds have vanished. Emptied, the polished shells of milkweed pods grow brittle and loose.

A few of the less delectable wildflower seeds –like carrion flower–hang on, withered and waiting.

Indian grass and other prairie grasses are weather bleached to colorless ghosts.

Still, if you look closely, big bluestem leaves are etched with reds, pinks, chocolates, and yellows. 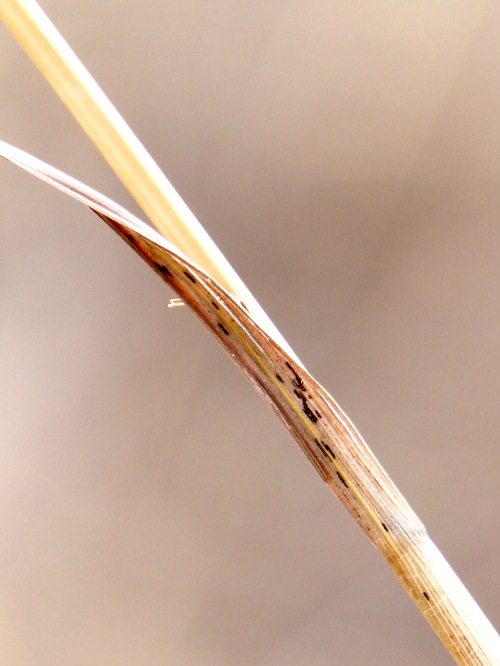 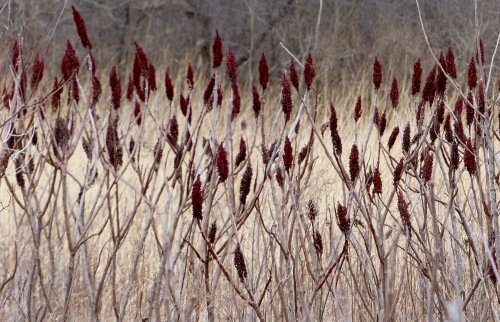 …while switchgrass throws a party, complete with confetti and streamers. 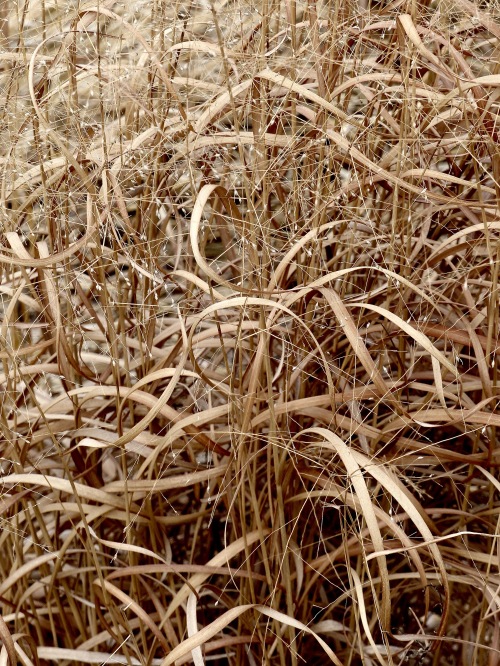 Near my backyard prairie patch, black-capped chickadees and a cardinal cautiously crunch seeds at the feeder. Startled by a sound, they fly up as one into the maple. There, they tentatively practice their spring mating songs.

Warmer weather is just around the corner.

Can you catch a whisper of spring? Do you see the signs? Look. Listen. We’re almost there.

Willa Cather (1873-1947), whose quote from My Antonia opens this essay, was a Pulitzer Prize winning writer whose books about the Great Plains immortalized prairie for her readers. She hated her birth name, which was Wilella, and she called herself Willie or William. A graduate of the University of Nebraska-Lincoln, Cather spent most of her adult life in New York City, where she drew on her childhood memories of Nebraska to write stories of the prairie. She was elected a Fellow of the American Arts and Sciences in 1943, although critics dismissed much of her later writing as nostalgic and out of touch with the times. Cather’s best know trilogy of novels, Oh Pioneers! (1913), The Song of the Lark (1915), and My Antonia (1918), are classics on the prairie landscape and the immigrants who lived there.

The Perils of Reading About Prairie

“Education is thinking, and thinking is looking for yourself and seeing what’s there, not what you got told was there.”–William Least Heat-Moon

It’s easy to let others tell you what’s “out there.” I know. As a former indie bookseller and lover of any book with the tag “nature essay” on it, I’m addicted to words. Reading books about prairie–and following social media updates or blog essays on the natural world–are only a few of the reasons I enjoy being an armchair nature lover. I can delight in woodlands, wetlands, and prairies without any of the discomfort involved in actually being there.

Through words, I can imagine the winter greens and umbers of mosses carpeting a fallen log, with autumn leaves still lingering.

Or, through words, I can imagine prairie aromatherapy. A little crushed mountain mint rubbed between your fingers — mmmmm.

Through words, I can “see” how the wind moves the hyssop in undulating waves.

Or think about thimbleweed seedheads, in all stages of blow out, and how soft they would feel if I stroked them against my cheek. Like silk.

The furred white seed heads are in sharp contrast to the geometry of the winter grasses, crisscrossing in golds and soft bronzes. Words can tell me that. 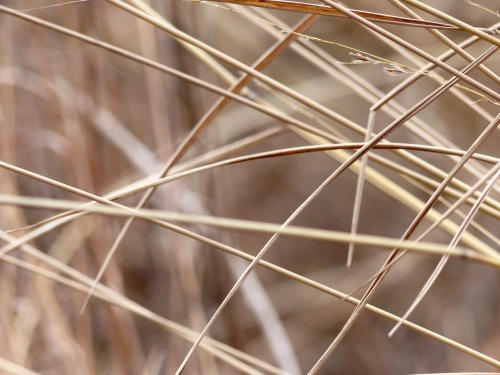 I love reading about prairie. It enriches what I see there; inspires me to pay attention.

Sometimes it’s easier for me to just read  about the natural world in February. The days can be gloomy and cold. I feel a distinct lack of motivation. With reading, there is no mud, drive-time, or layering on sweatshirts, coats, gloves, and hats. The only aches and pains I have after closing a book or reading a social media excerpt are a stiff wrist and tired eyes. Unlike a good, long hike, where I remember it in my muscles for days afterward.

But I’ve found that the biggest peril of reading about the prairie and the natural world is that I can feel as if I’ve been there and looked. And I haven’t.

It’s easy for me to turn inwards in winter, to stay inside and let others tell me what’s going on. To read words about the world in isolation.

But without being there, I miss the connection of the heart to what I see. And of course, what each of us sees is filtered through our own unique lens. No one else’s words can replicate that for us.

So I go. And I look. And then I return home, calmer, more at peace. Don’t get me wrong. I continue to devour words about the outdoors anywhere I find them. But prairie is my place to be. Words, no matter how inspired, are no substitute for that.

Wherever you find yourself, I hope you’ll go see what’s happening outdoors. Take a deep breath. Notice the sounds. See what the sky looks like. 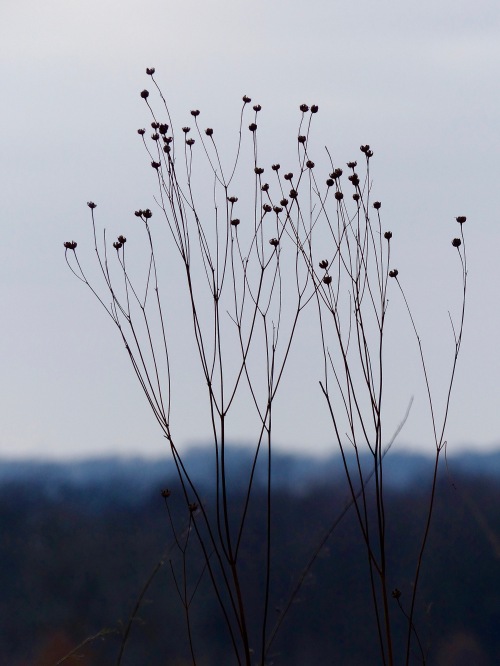 Let me know what you discover.

After all, it’s a beautiful world.

William Least Heat-Moon (1939), also known as William Trogden, is a Missouri native and resident whose quote from Blue Highways  opens this essay.  He took the invitation to “go see” literally and explored the back roads of the United States. He is the author of several books, including PrairieEryth (1991), which looks at the history, landscape, and people of Chase County, Kansas. Both books are a commitment of time at more than 400 pages each, but well worth it. Another favorite quote of mine from Blue Highways: “Instead of insight, maybe all a man gets is strength to wander for a while. Maybe the only gift is a chance to inquire, to know nothing for certain. An inheritance of wonder and nothing more.” May we all have strength to wander and wonder.

Special thanks to Susan Kleiman, nature educator at Byron Forest Preserve, for her ID help on this post. Any ID errors are my own.