“How important it is to walk along, not in haste but slowly, looking at everything and calling out Yes!”– Mary Oliver

Ask for their top 10 list of February destinations, and most of my friends would tell you “anywhere warm.” I agree. Toward the end of a Chicago region winter, I’m  ready to shed the shivery cold for a few days and escape to some far-flung beach down south.

But the beach in February is not my number one destination. I include walking trails through prairie remnants in winter a little higher on my list.

Tonight, Jeff and I are walking the Belmont Prairie in Downer’s Grove, Illinois. It’s small, as prairies go, but as a remnant—part of the original Illinois tallgrass prairie which escaped development and the plow—it’s special.  Writer John Madson wrote in Where the Sky Began that his “feeling for tallgrass prairie is like that of a modern man who has fallen in love with the face in a faded tintype. Only the frame is still real; the rest is illusion and dream.” Remnants remind me of those “faded tintypes.” Ghosts. 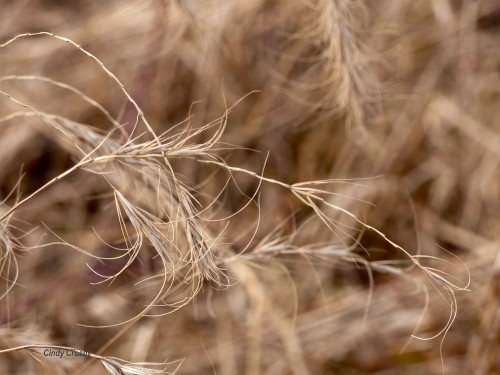 Very little of our original prairies have survived; about 2,300 high quality acres are left in Illinois. Another reason to be grateful for Belmont Prairie’s 10-acre remnant.

The grasses are weather-bleached and flattened now. You can imagine how references to the prairie as a sea came to be. Walking the trails here, amid the waves of winter tallgrass, can leave you unsteady on your feet, a little like wading through the surf and sand.

A creek glistens. Puddles of snowmelt glow.  I’ve been re-reading Tolkien’s Lord of the Rings series this winter, and the creek puts me in mind of Galadriel’s silver elvish rope that helped Frodo and Sam continue their quest to darkest Mordor. Magical. A tiny sliver of creek is also iced in on the right—can you see it in the grasses? Barely visible, but the setting sun sets it alight. 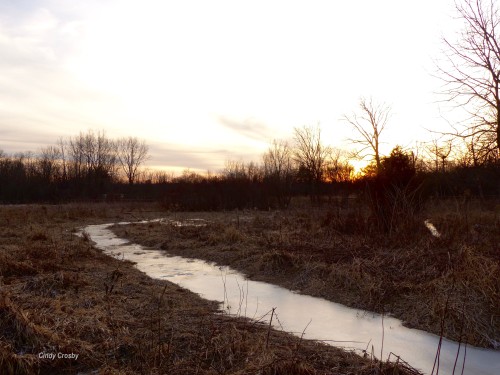 As we hike, Canada geese begin to settle in, pulling their V-string necklaces across the twilight overhead. 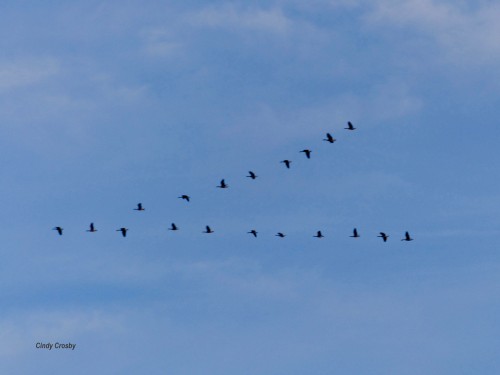 Geese have a bad rap here in the Chicago suburbs, but I admire their sense of direction, their seamless ability to work as an aerial team, their perfectly spaced flight pattern. Their confidence in knowing the way home.

Honk-honk! The soundtrack of dusk.

A crescent moon scythes its way across the burgeoning gloom. 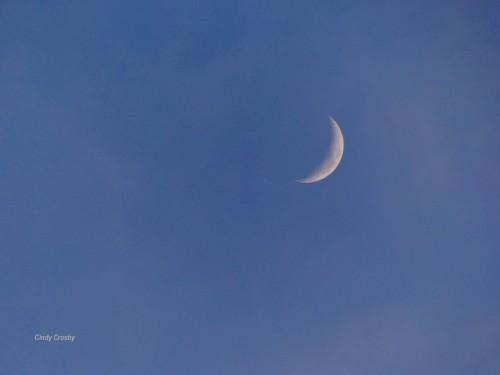 Still enough light to see. The reflections of ice spark the last light.

Poke around. In the mud and snow pockets, trapped in north-facing crevices, there are signs of spring to come. A few spears of green. Water running under the ice.

Look closely, and you may find a few tracks. Mammals are out and about in the cold. Birds.  In my backyard, close to the prairie patch, we’ve been feeding the birds extra food during the bitter temperatures, and they, in turn, have graced us with color, motion, and beauty.  As I scrubbed potatoes before having some friends over for dinner this weekend, my mundane task was made enjoyable by watching the interplay at the feeders outside my kitchen window. Scrubbing potatoes became meditation of sorts. Outside were squabbling sparrows.  The occasional red-bellied woodpecker. Juncos–one of my favorites–nun-like in their black and white feathered habits. The occasional burst of cardinal color.  Darting chickadees. Nuthatches, hanging upside down, zipping in for a peanut or two. Downy woodpeckers, like this one.

The seeds on the ground attract  more than birds. There are gangs of squirrels, well-fed and prosperous. If I wake early, I might spot a large eastern cottontail scavenging seeds, or even a red fox, whose antics with her kits have delighted us in the neighborhood over the years (and kept the resident chipmunk herds in check). Once in a while, over the years, we’ll surprise her on our back porch.

Another backyard visitor through the year is the opossum, who finds the seeds under the bird feeders a nice change of diet.

The opossum’s face looks a bit like a heart, doesn’t it? It reminded me that Valentine’s Day is Thursday. Time to find or make a card, and perhaps shop for a book or two for my best hiking partner. Speaking of him….

As Jeff and I head for the parking lot at Belmont Prairie, the great-horned owl calls from the treeline that hems the tallgrass. I hear the soft murmur. Who-Who- Hoooo. 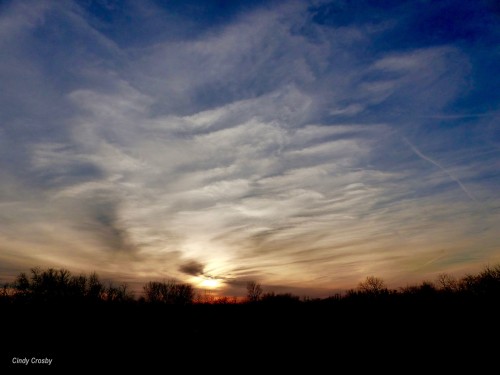 Jeff and I once found a great horned owl here—perhaps this very one— in daylight, high in a tree on the edge of the grasses. I owl-prowl sometimes through the woods, hunting for bone and fur-filled scat pellets under trees. Find a pellet under a tree, look up, and you’ll occasionally get lucky and see an owl.

I think about Mary Oliver’s poem, “Little Owl Who Lives in the Orchard,” which begins….”His beak could open a bottle… .” As someone who teaches  nature writing in the Chicago region, I love to read this poem to my students. The sounds of Oliver’s word choices  (“black, smocked crickets”), her contrasts of terror and sweet, and her descriptions  (“when I see his wings open, like two black ferns”) remind me of the joy of words, images, and our experiences outdoors.

Oliver’s poem about the owl ends; “The hooked head stares from its house of dark, feathery lace. It could be a valentine.”

The owl calls again. I think of the people and prairie I love. And, the joy that sharing a love of wild things with others can bring.

It’s a happiness not quite like any other. Try it yourself. And see.

Mary Oliver (1936-2019), whose words from Owls and Other Fantasies opens this blogpost, was a Pulitzer Prize-winning American poet (1984, American Primitive) and winner of the National Book Award (1992, New and Selected Poems). Her admonition, “Pay attention. Be astonished! Tell about it.,” is some of the best advice I know. She died in January.

8 responses to “A Prairie Valentine”