“Most children have a bug period. I never grew out of mine.” — E.O.Wilson

As the curtain falls on June, rains and heat coax the prairie into luxuriant growth. 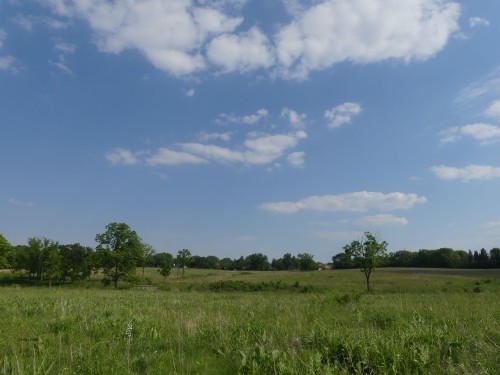 Pale purple coneflowers, white wild indigo, and carrot-colored butterfly weed along with a suite of June’s other familiar wildflowers rampage across the prairie. I marvel at them as I hike. More unusual finds, like bunch flower and its suite of tiny flies and beetle pollinators, are a reason to drop to my knees in wonder.  Flora of the Chicago Region gives it a “10” as its coefficient of conservatism.

Not far from the bunchflowers, the prairie lilies are in bloom. Another “10!” Such startling color. Somehow, the deer have missed munching on them this season. See if you can find the tiny crab spider.

An umbrella paper wasp ignores me as it concentrates on an architectural project.

Prairie coreopsis is a magnet for pollinators. Bees, wasps, moth caterpillars, flies, and beetles can’t resist its bright flowerhead, brimming with nectar and pollen. I love its sunny yellow flowers, a lift for my spirits. 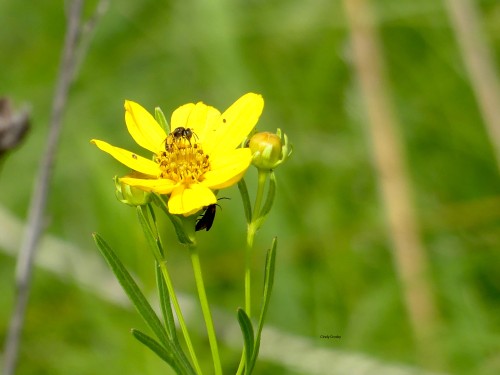 Hello, Halloween pennants! Good to see you back on the prairie again. 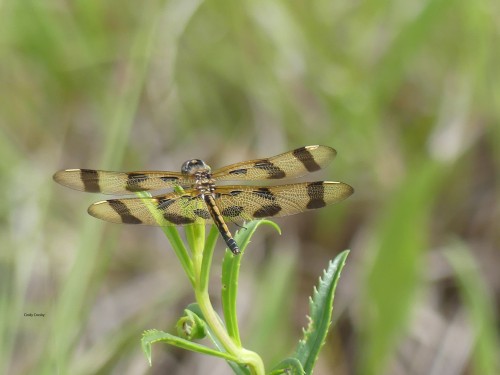 The black saddlebags dragonfly patrols in circles, silhouetted against the summer sky…

…but I caught this one in a moment of rest.

Common green darners are….well…common, but I still admire the patterns—that bull’s eye spot!—and coloration that makes them so distinct from any of their kind. Some say green darners look like cyclops. This female is unmistakable.

In Willoway Brook, the ebony jewelwing damselflies flutter; looping in and out of the tallgrass to swipe smaller insects for breakfast.

Every wildflower and grass stalk is a potential perch for an Odonate.  Widow skimmers. The blue you see on their wings is pruinescence, and gives it that startling contrast. 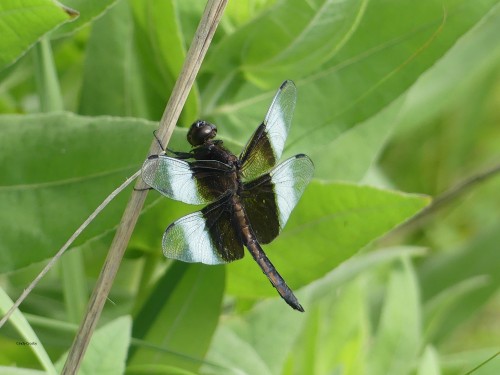 Eastern amberwings hang out on leadplant. This one’s a female! Pretty. 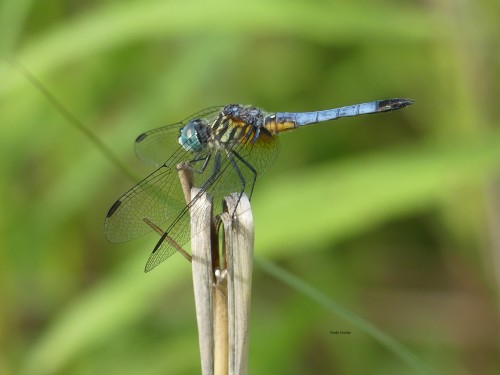 A 12-spotted skimmers dragonfly basks in the sunshine, trying to regulate its body temperature, which it takes from the temperature around it. 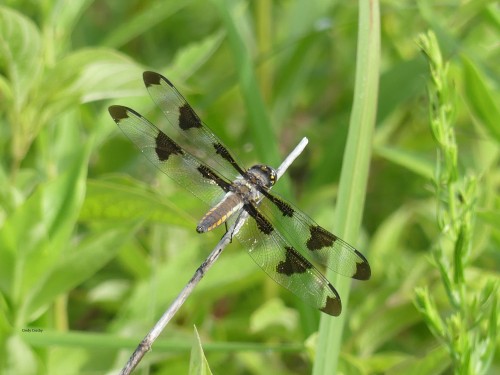 So many wonders! And summer on the prairie has only just begun.

It’s going to be an amazing season.

The opening quote is from E.O. Wilson’s  (1929-) Naturalist. His blindness in one eye from a childhood fishing accident led to his study of ants, which as “little things” were easy for him to focus on. Today, Wilson is recognized as the world’s leading authority on ants. He won several Pulitzer Prizes (1979, 1991) and the U.S. National Medal of Science (1976) among many other awards; he was named one of Time Magazine’s 25 Most Influential People in 1995. Thank you, John Heneghen, for loaning me Naturalist. A very enjoyable read.

“Dragonfly and Damselfly Beginning ID Online” through The Morton Arboretum. July 8 and July 10 –two morning classes online, with a day in between for you to work independently in the field, then bring your questions back for help. Register here.

“Prairie Ethnobotany Online” –through The Morton Arboretum. July 31 and August 7, 9-11 a.m. with a week  in between to enjoy your knowledge in the field. Learn about how people have used and enjoyed prairie plants through history. Register here.

“Tallgrass Prairie Ecology Online” begins a new session in September! Work from home at your own pace (with suggested assignment deadlines) for 60 days to complete the material, and meet other prairie volunteers and stewards on the discussion boards and in the optional ZOOM session. Register here.

Just released! Chasing Dragonflies: A Natural, Cultural, and Personal History. Order now from your favorite indie bookstore such as the Morton Arboretum Store and The Bookstore of Glen Ellyn, or online at bookshop.org and other book venues. Order direct through Northwestern University Press and receive 25% off — use coupon code NUP2020 and see the information below. Thank you for supporting small presses, bookstores, and writers during this chaotic time.

Want more prairie? Follow Cindy on Facebook, Twitter (@phrelanzer) and Instagram (@phrelanzer). Or enjoy some virtual trips to the prairie through reading Tallgrass Conversations: In Search of the Prairie Spirit and The Tallgrass Prairie: An Introduction.